By GMAFebruary 1, 2022News
No Comments 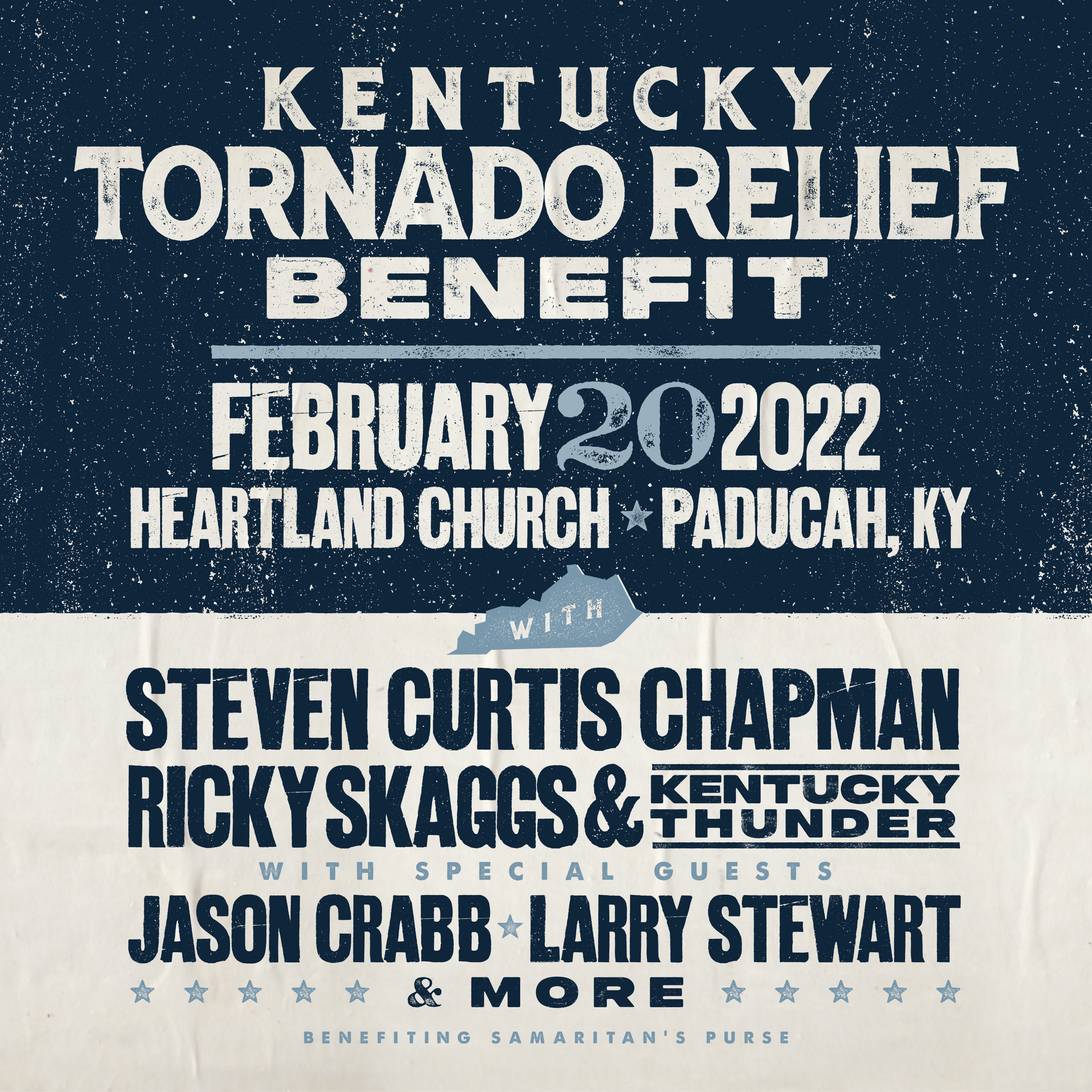 PADUCAH, Ky. – Devastated by the damage from the Dec. 10 tornado in Mayfield, Ky., Steven Curtis Chapman and Ricky Skaggs have organized a benefit concert on Sunday, Feb. 20 at 7 p.m. at Heartland Church in Chapman’s hometown of Paducah, Ky. Chapman and Skaggs enlisted friends, Jason Crabb, Larry Stewart and more, for the lineup. All proceeds will benefit victims of the tornado via Samaritan’s Purse. To purchase tickets, click HERE.

Blue Wolf Capital Partners, The State Group and the family of companies throughout Kentucky (Rick’s Electric, Beltline Electric, Comstock Electric and Delta Services) are pleased to sponsor the Kentucky tornado relief benefit concert. They are committed to helping this region fully recover from the devastation caused by the storms and their thoughts and prayers go out to all who were affected.

“As a boy who was born and raised in Paducah, Ky. (and spent a lot of my childhood in Mayfield), I have been broken-hearted to see the devastation caused by the tornadoes that swept through my home state back in December. I’ve been praying for the folks back home and have wanted to find a way to encourage them and show them some love. So I reached out to my “bluegrass big brother” and fellow Kentuckian, Ricky Skaggs, and said, “let’s go play some music and try to raise some money to love on the people there”…and thankfully he agreed! I’m also very grateful to be joined by two other Kentucky brothers, Jason Crabb and Larry Stewart (also from Paducah) for this one night only Kentucky tornado relief benefit, with proceeds going to Samaritan’s Purse to help the work that they’re doing there for those who have been most devastated and affected by these tornadoes,” shared Chapman.

“I’m really glad to be coming back again to help the people of Mayfield, Ky. I came with Franklin Graham and Samaritan’s Purse on Christmas Eve, but I knew I just had to come back. My heart broke when I saw the devastation. This benefit concert will be a great opportunity for the people of Kentucky and the surrounding states to come and help our neighbors that have lost so much. Bring your friends and help all you can, as they really need us right now,” stated Skaggs.

“I am a Kentucky boy, through and through. The moment I heard about the destruction and loss of life from the tornados, I went to help. Thankfully, great friends and organizations like Jentezen Franklin, God’s Pit Crew and Samaritan’s Purse jumped right in. And now, my friends – and fellow Kentucky brothers – Steven Curtis Chapman and Ricky Skaggs are pitching in to help even more people through this benefit concert. I sure hope you’ll come out, open up your hearts and join us to make a difference. It’s going to take all of us to rebuild,” added Crabb.

“As Kentucky families continue to recover, we are incredibly grateful for the talent and generosity of Steven Curtis Chapman and Ricky Skaggs,” said Franklin Graham, president of Samaritan’s Purse. “The proceeds of this concert will go toward our ongoing efforts to help tornado victims return home while reminding them that God loves them and they are not forgotten.”

Based in Boone, N.C., Samaritan’s Purse responds to the physical and spiritual needs of individuals in crisis situations, especially in locations where few others are working. Led by President and CEO Franklin Graham, Samaritan’s Purse works in more than 100 countries to provide aid to victims of war, disease, disaster, poverty, famine and persecution. For more information, visit SamaritansPurse.org.