Continuing a tradition of giving back, GRAMMY® Award-nominated rock band NEEDTOBREATHE close out a banner 2021 with charitable contributions to OneWorld Health and For Others.

After over a decade of work raising funds and awareness for the incredible mission of OneWorld Health, the group hosted NEEDTOBREATHE & Friends One Night Only Supporting OneWorld Health in Nashville, TN last month. Following a gathering at the Rarebird Rooftop bar at the start of the weekend, the guys took the stage at the legendary Country Music Hall of Fame, joined by country superstar and friend Thomas Rhett, for an exclusive Saturday night gig, dinner, drinks, and auction. By the end of the festivities, they had raised over $1.4 million, which will provide sustainable, affordable, and accessible healthcare in East Africa and Central America. This event brings NEEDTOBREATHE’s fundraising total to nearly $6.5 million since the inception of their partnership. 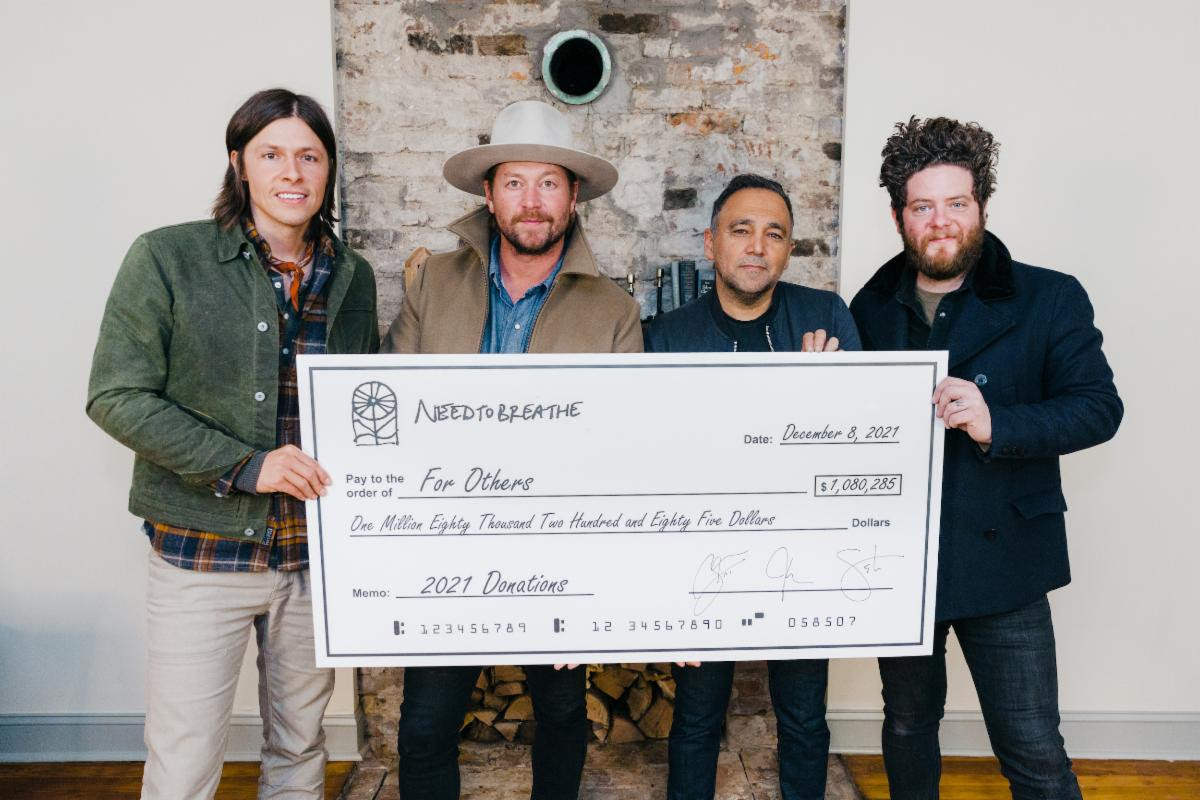 NEEEDTOBREATHE made their return to the road with a very special purpose this year. They joined forces with For Others as the official charity partner for their 38-date Into The Mystery Tour across the U.S. NEEDTOBREATHE donated $1 from each ticket sold to the organization, which endeavors to address the country’s foster care crisis. Additionally, fans utilized the “text to donate” functionality during the show to contribute. In total, over $1.1 million was generated in support of For Others.

​​“Our band has always aimed to do more than make music and play shows,” says lead singer and songwriter Bear Rinehart. “We have always felt we have a responsibility to use our platform as a vehicle for change — acknowledging the power of music throughout history to bring people together and do good for others. We are blown away by our fans’ support of these initiatives and incredibly humbled by the work we have been able to do together.”

This week, the band proudly presented both organizations with checks.

Be on the lookout for more from NEEDTOBREATHE soon.

NEEDTOBREATHE’s latest studio album Into The Mystery is available physically and digitally now via Elektra Records HERE. The album was released in July, and debuted in the Top 10 across three Billboard charts. The critically acclaimed collection has received praise from Rolling Stone, Billboard, Entertainment Tonight, People, American Songwriter, and more. NEEDTOBREATHE just wrapped a 38 city tour in support of the album, which included their fifth consecutive sold out show at Denver, CO’s Red Rocks Amphitheatre and first-ever headline performance at Nashville, TN’s Bridgestone Arena. The album’s accompanying documentary “NEEDTOBREATHE: Into The Mystery” is available on demand (including iTunes / Apple TV and Amazon Prime Video) via Greenwich Entertainment. Watch the film HERE.